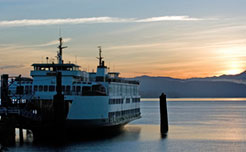 Anacortes (population 16,790 in 2009) is one of Western Washington's jewels, offering scenic Pacific Northwest views from almost everywhere in this waterfront city, as well as a host of recreational opportunities in the San Juan Islands and easy access to city amenities.

Anacortes, WA real estate is within 80 miles of Seattle and 100 miles of Vancouver, B.C., two of the world's most beautiful and vibrant cities. It also is the gateway to the San Juan Islands through the Washington State Ferries system. Multiple ferries travel each day between Anacortes and San Juan, Orcas, Lopez and Shaw islands. A ferry also travels each day during the tourist season between Anacortes and Sidney on British Columbia's Vancouver Island. Owning a piece of Pacific NW real estate in Anacortes will allow you easy access to each of these areas.

Anacortes infomation tells you that it is actually located on an island itself - Fidalgo Island, which is accessible via bridges from the mainland. Recreational activities include sailing, power boating, whale watching, hiking, kayaking, mountain biking, golf, camping, sport fishing, bird watching, scuba diving and beach-combing. The Anacortes Salmon Derby in March is one of the largest in the state. Anacortes will also be close to all the excitement during the 2010 Olympic Winter Games in Vancouver, B.C. If you are interested in these activities, conduct an Anacortes Real Estate search for a Pacific NW property in this area.

For those who prefer to stay on land, Washington Park, the city's largest, covers 220 acres. It features a full-service campground, boat launch, picnic shelter, playground and beach area. Deception Pass State Park, just 20 minutes from Anacortes, draws more than 3 million visitors annually. The 4,134-acre park includes 77,000 feet of saltwater shoreline and three freshwater lakes. Deception Pass is a narrow, deep and turbulent channel boasting spectacular, dramatic views. Anacortes, WA real estate owners can walk onto the two bridges, about 180 feet above the water, to gaze down upon it and outward toward the San Juan Islands.

Major community events in Anacortes include the Waterfront Festival in May and the Anacortes Arts Festival in August. They're complemented by Fourth of July and holiday parades, as well as the dazzling beauty of nearby fields during the Skagit Valley Tulip Festival each April.

Anacortes has a busy marine terminal that ships forest products and bulk goods to Pacific Rim countries. Tenants at the Port of Anacortes include shipbuilders, a large commercial fishing fleet and providers of marine supplies. The Port of Anacortes also offers 1,100 boating slips and a small airport with commercial and charter service.

Two nearby oil refineries, home of many family-wage jobs, provide stability to the local economy.

Health-care facilities are led by Island Hospital, named in 2005 as one of the nation's top 100 hospitals displaying the greatest progress in improving performance over a five-year period. Island Hospital's features include a state-of-the-art birth center and cancer-care center.
The expertise of a knowledgeable Pacific NW real estate agent can assist you in your Anacortes MLS search. Susan Stecher is an expert Anacortes realtor with a wealth of information about the area and she can help you locate the piece of Anacortes real estate to meet all your specifications. She will walk you through the entire buying process, whether this is your first time buying or tenth. Contact Susan today to get started in your Anacortes home search.