View every available Lopez Island real estate listing for sale on the MLS. 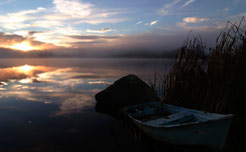 Lopez Island, in the Pacific NW, is the third-largest of the San Juan Islands at nearly 30 square miles, but is the closest by ferry to Anacortes (45 minutes). It's best known as the "friendly island" because drivers wave at acquaintances and strangers alike as they drive by them. This is a great place to look for a piece of Lopez Island real estate.

Lopez Island isn't as much of a tourism draw when compared to San Juan and Orcas islands , contributing to its slow-paced nature. After a surge of people in the 1980s and 1990s, its population stabilized, rising only 12 percent from 2000 to 2006 (2,432 people).

Self-employment is high on Lopez Island, which doesn't have large resorts or manufacturing plants. A mixture of farmers, fishermen and artists populate the island. The local school district is Lopez Island's largest employer. A Pacific NW realtor can assist in finding you the perfect Lopez Island real estate with a quick search of the Pacific NW MLS.

Lopez Island's state and county parks, miles of shoreline and a small year-round population all contribute to an abundance of wildlife. It's possible to see whales breach, eagles soar and deer graze -- all in the same day.

The island is relatively flat, making it popular among bicyclists. One of the island's major events is the Tour de Lopez, which draws 650 cyclists the last Saturday in April. Residents and visitors celebrate each Fourth of July with a parade, salmon barbecue and fireworks display.

Weather for all of the San Juan Islands is drier than its stereotypical image. Islanders see the sun an average of 247 days each year. The Cascade and Olympic mountain ranges limit both rain clouds and cold fronts that reach the islands. The surrounding ocean waters contribute to the mild climate, with temperatures rarely rising above 80 degrees in the summer nor falling below 30 degrees in the winter.

Most people reach Lopez Island via the Washington State Ferries system. The ferry docks at the north end of the island. Protected moorage is available at two marinas in Fisherman Bay, a half-mile from Lopez Village. A small airstrip is available for pilots in this Pacific NW area.

The Lopez Island School District serves approximately 270 students in kindergarten through high school.
The time is right to contact a Pacific NW realtor. Lopez Island real estate expert, Susan Stecher, is ready to assist you in your search on the Pacific Northwest MLS to locate the perfect Lopez Island home to meet all your needs. Contact Susan today to get started on your search.