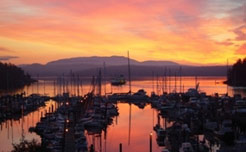 San Juan Island is best known as the home of Friday Harbor, the only incorporated city on the land (population 2,260 in 2009). With all the fantastic San Juan Island, Washington real estate, the population is sure to continue to grow.

Tourism reigns in San Juan Island, Washington in the summer months as visitors flock to the island, many of them coming to see orca whales. Whale-watching boats are prevalent, but often whales can be seen from the shore at Lime Kiln Point State Park, just 10 miles from Friday Harbor. Island life has a much slower pace during non-summer months in this Pacific NW area when the number of tourists falls dramatically.

Boating, bicycling and beach-combing are among popular recreational activities on San Juan Island. The island also offers some great Pacific NW real estate and an expert San Juan Island realtor can help you find the one just right for you.

Most people reach Friday Harbor via the Washington State Ferries system. A full-service marina is available for boaters. An airstrip is located on the edge of Friday Harbor.
A Pacific NW realtor can help you through the entire home buying process. Susan Stecher is a knowledgeable San Juan Island real estate agent, who will assist you in conducting a San Juan Island MLS search based on your specific needs.

Owners of Friday Island real estate and tourists alike fall in love with Friday Harbor (population 2,210 in 2006), a quaint town on San Juan Island. Friday Harbor is the only incorporated city in San Juan County and serves as its county seat.

Tourism reigns in the summer months as visitors flock to the island, many of them coming to see orca whales. Whale-watching boats are prevalent, but often whales can be seen from the shore at Lime Kiln Point State Park just 10 miles from Friday Harbor. The park is considered one of the best places in the world to view whales from a land-based facility. Island life has a much slower pace during non-summer months when the number of tourists falls dramatically. If this type of living sounds appealing, a search of the Pacific NW MLS will reveal some Friday Harbor homes for sale to suit your needs and wants.

Weather for all of the San Juan Islands is drier than its stereotypical image. Islanders see the sun an average of 247 days each year. The Cascade and Olympic mountain ranges limit both rain clouds and cold fronts that reach the islands. The surrounding ocean waters contribute to the mild climate, with temperatures rarely rising above 80 degrees in the summer nor falling below 30 degrees in the winter.

Most people reach Friday Harbor via the Washington State Ferries system. The ferry docks within several blocks of most shops, restaurants and lodging establishments in Friday Harbor. A non-stop trip between Friday Harbor and Anacortes on the mainland takes approximately 65 minutes, which makes Friday Harbor real estate just far enough from the hustle and bustle, but close enough to get to most places. A full-service marina is available for boaters. An airstrip is located on the edge of Friday Harbor.

The former British and American camps at opposite ends of the island comprise the San Juan Island National Historical Park, which commemorates the 1859 Pig War. Interpretive centers and reconstructed buildings recall early European settlements in the area.

Located on the northern tip of San Juan Island, Roche Harbor offers a world-class marina with 377 slips and accommodating vessels up to 160 feet long. The historical Pacific NW village is a favorite destination of many because of its scenic location and numerous amenities, including a spa, lodging and excellent restaurants. Transportation is available on a regular basis during summers between Roche Harbor and Friday Harbor, the island's only city. These conveniences make Roche Harbor real estate appealing.
The time is right to contact a Pacific NW realtor. San Juan Island real estate expert, Susan Stecher, is ready to assist you in your search on the Pacific Northwest MLS to locate the perfect San Juan Island, Friday Island, or Roche Harbor home to meet all your needs. Contact Susan today to get started on your search.