View every available Whidbey Island real estate listing for sale on the MLS. 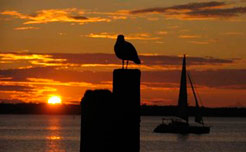 Whidbey Island (population 62,323 in 2006) is the largest island in the continental U.S. that is surrounded by saltwater. Access to this Pacific Northwest island is via State Route 20 and the bridge over Deception Pass, as well as two state ferry routes.

Whidbey Island's average rainfall is significantly less than the Seattle area because of the "rain shadow" effect of the Olympic Mountains. The pleasant temperatures enjoyed year-round make it a wonderful place to visit or purchase a piece of Whidbey Island, WA real estate.

Oak Harbor is Whidbey Island's largest city with a population of 23,360 in 2009. The waterfront community, with terrific property on the Whidbey Island MLS, has also been home to Naval Air Station (NAS) Whidbey Island since 1942. Consequently, many residents are active-duty personnel, retired veterans or linked to the base through business or relationships. Nineteen active-duty squadrons are based at NAS Whidbey Island, including 15 EA-6B Prowler squadrons.

Oak Harbor's small-town flavor continues to be displayed in the numerous annual celebrations. The community's Dutch heritage is celebrated the last weekend of April during the annual Holland Happening celebration. Whidbey Island Race Week, held each year in July, has been rated among the top 20 yachting regattas in the world and will celebrate its 25th anniversary in 2007. Enjoy these celebrations every year by owning Whidbey Island real estate.

Langley (population 1,100 in 2009) is perched on a low bluff at the southern end of Whidbey Island. The community overlooks Puget Sound and enjoys stunning views of the Cascade Mountains. A thriving arts community, Langley is home to many regional and national artists. The village offers numerous art galleries as well as shops with handmade clothing, jewelry, glass and furniture. Langley is just 27 miles from Coupeville and 38 miles from Oak Harbor.

Owners of Pacific Northwest real estate in or near Whidbey Island will enjoy great outdoor recreation. Fishing, kayaking, hiking, biking, boating, bird watching, clamming, golfing and camping are favorite activities for residents and visitors alike. Some enjoy sailboarding and diving. A full-service marina in Oak Harbor is available for boaters.

The island also offers many state and county parks along the shoreline. Fort Ebey State Park, a 645-acre camping park with a freshwater lake for fishing and three miles of saltwater shoreline, is just two miles north of Coupeville. Fort Casey State Park, a former coast artillery post with two historic guns on display, overlooks the Keystone ferry landing just six miles south of Coupeville. Deception Pass State Park, 20 miles north of Coupeville, draws more than 3 million visitors annually. The 4,134-acre park includes 77,000 feet of saltwater shoreline and three freshwater lakes. Deception Pass is a narrow, deep and turbulent channel. Many walk onto the two bridges, about 180 feet above the water, to gaze down upon it.

Whidbey Island is linked to the mainland by the bridges over Deception Pass at its north end and two state ferries to the south. Some residents commute on the 20-minute ferry between Clinton and Mukilteo, just south of Everett. Another ferry with a 30-minute crossing time travels between Keystone and Port Townsend on the Olympia Peninsula.

Public education for kindergarten through high school is provided by the Oak Harbor, Coupeville and South Whidbey school districts. A Whidbey Island campus of Skagit Valley College is located in Oak Harbor.
A Whidbey Island, WA realtor can help you find the Pacific Northwest real estate that is right for you. Pacific Northwest real estate agent Susan Stecher is knowledgeable about the entire area and can assist you in the entire home-buying process. Contact Susan today to get your Whidbey Island MLS search started.